by admin
in Entertainment
0

Johannes Vermeer, also referred to as Jan Vermeer, was a Dutch Baroque painter who mostly illustrated interior scenes of domestic living and a few mythological images. He produced relatively few paintings—estimated at 45—for a closed circle of patrons within his locale, limiting his popularity to Delft and the neighboring city of Hague. Also, his death left his family in outstanding debt, making it evident that Vermeer did not enjoy a very prosperous career.

Only a few of Vermeer’s works are available today. Nonetheless, they are regarded as rare treasures in some of the world’s finest museums. His paintings stand out for their pure lighting and vibrant pigmentation, which are attributes that reflect a serene sense of dignity that cannot be outdated.

Although undeniably among the most celebrated Dutch painters, Vermeer’s works weren’t well known until the late 19th century, and during his own time, he was a less famous artist. With only 36 surviving paintings to his name, we will look at Vermeer artist and his moderately successful career in this article. 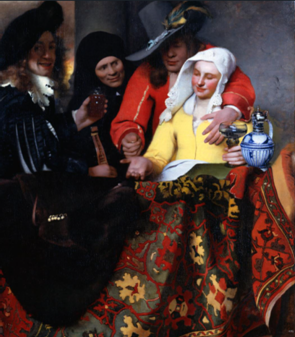 Johannes Vermeer (October 1632 in Delft) was a mercantile town. He was born to a lower-middle-class family with his father, Reijnier Jansz, working as a fabric-weaver turned innkeeper. His mother, Digna Baltus, is believed to have been an illiterate housewife seeing as she could only sign “X” where her name should have been on her marriage certificate.

Until the 19th century, there was very little to know about Vermeer artist. The little that was known about Vermeer came from official documents, registers, and the commentary of other artists. After recording his baptism at a local church on 31 October 1632, Vermeer disappeared without further records for nearly 20 years. As a result, details about where he received his art training remain unattested.

Perhaps Vermeer’s first encounter with art was from his father, Reijnier, who also worked as an art dealer. Also worthy of note is that after Reijnier’s death in 1652, Vermeer inherited his businesses, including the art dealership. This may likely have helped ignite the artist’s passion for art.

In April 1653, Vermeer married Catherina Bolnes, with whom he had 11 surviving children. She was Catholic, and Vermeer converted to Catholicism. His conversion may have possibly been an attempt to please his wealthy divorcee mother-in-law, who was at first against their union. The newlyweds moved in with Catherina’s mother after the wedding. 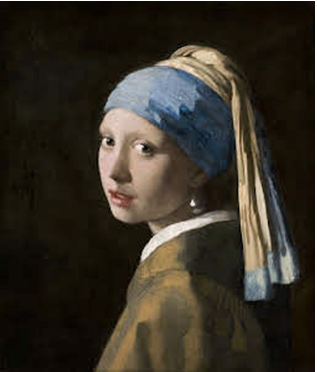 The wealth of Vermeer’s in-laws secured some benefits that most other artists didn’t have. He could paint for his pleasure since he didn’t have to support his family from his career; he never took on apprentices and was known to use expensive pigments in his art. Nonetheless, Vermeer paintings commanded high prices, and he attained a modest celebrity status during his time.

Vermeer’s career began in the early 1650s with large-scale biblical and mythological illustrations. He sampled styles from various seventeenth-century masters like Rembrandt and Caravaggio in his earliest works. However, by the conclusion of the decade, the artist began to develop his unique style.

In 1662, Vermeer became the head of the Guild of St Luke, a trade association for painters, which he joined shortly after his wedding in 1653. The new position established Vermeer as a respectable artist in his own right, earning him a small circle of generous Delft patrons and bringing him near numerous artists and art collectors. Some of Johannes Vermeer famous artworks include “Girl with a Pearl Earring”, “The Milkmaid”, and “The Music Lesson”.

Sadly, however, things took a dreadful turn for the artist during his late period. 1672 is infamous for being “The Year of Disaster in Dutch history.” The invasion of foreign troops crippled the Dutch economy, and accordingly, the art market crashed. As a result, Vermeer could barely sell any of his works and those he was dealing with. Consequently, he owed huge debts and was even caught stealing from his mother-in-law. These unfortunate circumstances led to his depression and subsequent death in 1675 at 43. 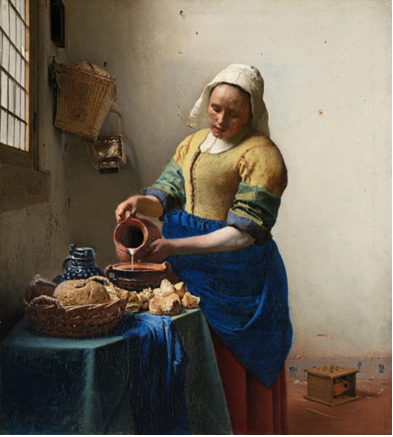 Vermeer enjoyed a moderate level of success during his lifetime, but it was nothing compared to the recognition his paintings receive today; after his death, his modest popularity gave way to obscurity. For example, Arnold Houbraken barely mentioned Vermeer in his book—Grand Theater of Dutch Painters and Women Artists—which served as a significant source of information on 17th-century Dutch painting. As a result, Vermeer was left out of subsequent surveys on Dutch art for almost two centuries.

Apart from unfavorable external circumstances, Vermeer’s obscurity may have also been contributed by the artist. While most Dutch painters produced paintings in their hundreds and sold them to a much broader market, Vermeer only made a small number of works. Only 36 remain today, leading historians to believe he may have only put out three paintings per year.

In addition to his meager output, Vermeer only kept a tight circle of patrons, all of whom were domiciled in his native city of Delft. Perhaps the only other location his reputation extended to was the neighboring city of Hague. The culmination of all these factors hindered Vermeer’s career, crippling it after his death.

However, in the 19th century, luck seemed to shine on Vermeer’s career when his art was rediscovered by art connoisseurs Gustav Friedrich Waagen and Théophile Thoré-Bürger. They published an essay in his honor attributing several works to him; this shot Vermeer’s posthumous reputation into the limelight, establishing him as one of the most revered painters in Dutch history.

Although he experienced relative success during his lifetime, Vermeer’s posthumous reputation suffered greatly. Like “The Allegory of Painting”, many of his works were attributed to other artists, and thus, Vermeer received no credit for his artistry. However, upon his rediscovery in the 19th century, Vermeer’s status drastically rose to respectable heights. Today, his surviving paintings are regarded as highly valuable and scattered across reputable museums worldwide.

What to Know about PopSockets in 2022

Custom Gift boxes: 4 good reasons why they are important for you

The Benefits of a Toto Site

How Kraft Candle Boxes Are Best for Fragile Product Delivery

It's hard to be a popular and successful itomboy when your face is still fresh-faced and new....